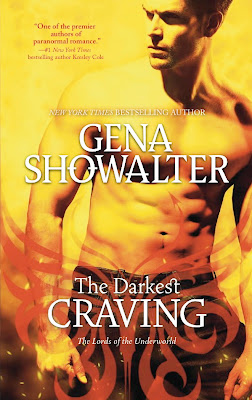 Having endured weeks of torture in the bowels of hell, Kane wants nothing to do with his beautiful rescuer, Josephina Aisling. The half-Fae female threatens to awaken the demon of Disaster inside him—a beast he's determined to kill, no matter the price.

Darkest Craving is the 10th book in Gena Showalter's Lords of the Underworld series.

As anyone who follows my blog most likely knows, the Lords of the Underworld series is my absolute favorite.  I love the way the hero, in this case Kane, has to battle with the demons that have possessed them to try to maintain some shadow of what they used to be.  All of the Lords are truly good at heart, contrary to some of their actions, and are always willing to do anything for the women they love.

Kane is no exception.  After recently being imprisoned in hell, he is losing the battle with his demon, Disaster.   Coupled with the recent prediction that he is destined to end up with someone who... well let's just say is not his first choice, and that he will start an apocalypse, Kane's future isn't looking too optimistic.

As hard as Kane has it, Josephina might even be worse off then him.  She has been being treated as a blood slave by her royal family for years, which probably helps them understand a little of what each other is going through.  These two had amazing chemistry and friendship.  While most heroines tend to drive me a little crazy, it always amazes me how Gena does such an excellent job making me love them almost as much as the hero.
There's also plenty of humor, not only between them but William's there too so need I say more?  William and his kids, the Rainbow Rejects, are through out the book and I just can't get enough of him.  He has such a snarky sense of humor that always manages to lighten up many of the scenes.

Gena Showalter has once again proven what a master story teller she is.  The only way to make a paranormal romance series better... add a dash of Greek mythology.  Gena has such an amazing overall story and cast of characters throughout the Lords of the Underworld series that it's no wonder why I recommend it to everyone :) 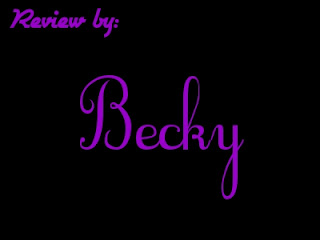 This book was provided by the author/publisher for an honest and fair review.