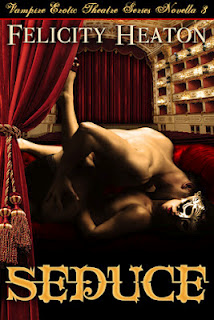 Bloodlust runs in his veins, a dark master waiting for the day it will reign over him. Now a woman with a pure soul and wicked intentions has him in her sights and is determined to crack the ice around his heart.

Antoine, one of the owners of Vampirerotique, has kept himself walled off from all emotion since his blood addiction has been threatening to take over.  With a dark past that haunts him every day, the only one he cares about anymore is his brother, Snow.  That is until Sera comes into the theater one night with her Sire to audition for a job.  Sera has no idea that awakening feelings in Antoine that had long been buried could be her downfall.  Will she risk it all for the unattainable Antoine?  Will she even want to when she finds out about his dark addiction?

Sera certainly has a "get him at all costs" attitude.  She's been admiring Antoine from afar at the theater but now has come up with the "brilliant" plan to audition for a part in order to get some alone time with him.  Things don't go down quite like she was hoping but obviously we wouldn't have a story if she didn't get somewhere *wink, wink*.  Antoine was certainly a tough man to crack, but after getting to know him and his brother Snow, you can certainly tell why.  Especially with a past relationship that he has been dwelling over for many years.  Their story managed to build it's way up even for a shorter book and didn't feel rushed.

I have to say that I am really anticipating Snow's book now!  We found out just enough about him to be very intrigued while still leaving him a huge mysterious, tortured character.  I can't wait for him to get his happily-ever-after.  Obviously I'm not alone since Ms. Heaton is holding out on his story, saving the best for last I'm hoping.  This was certainly a fast, sexy read!

Her next book in the series, "Enslave" will be coming out in August.  Then "Bewitch" in late fall and "Unleash" (which I'm hoping will be Snow's) in 2013.

Check out Felicity Heaton's other books on Amazon or view her website.