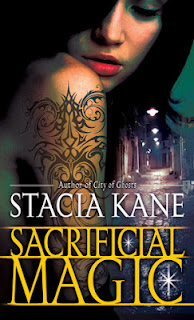 When Chess Putnam is ordered by an infamous crime boss—who also happens to be her drug dealer—to use her powers as a witch to solve a grisly murder involving dark magic, she knows she must rise to the challenge. Adding to the intensity: Chess’s boyfriend, Terrible, doesn’t trust her, and Lex, the son of a rival crime lord, is trying to reignite the sparks between him and Chess.

Plus there’s the little matter of Chess’s real job as a ghost hunter for the Church of Real Truth, investigating reports of a haunting at a school in the heart of Downside. Someone seems to be taking a crash course in summoning the dead—and if Chess doesn’t watch her back, she may soon be joining their ranks.

As Chess is drawn into a shadowy world of twisted secrets and dark violence, it soon becomes clear that she’s not going to emerge from its depths without making the ultimate sacrifice.
--------------------

***Warning:  This review contains plot spoilers if you are not up to date on the series.***

If I had not completely jumped on the Downside bandwagon initially, I am officially in love with this series now!

Sacrificial Magic takes place just a few weeks after the last book.   Terrible and Chess are finally together and Lex and her still remain friends.  Chess has been placed on a job with the Church of Real Truth to investigate a haunting in a local school.  Of course this school just happens to be in Slobag and Lex's territory.  While this case isn't quite the "end of the world" type cases she's been on lately it still proved to be an exciting, mysterious case.  Just when I think I have her cases all figured out, Kane throws me for a loop and I realize I couldn't have been more wrong.  The author has done such an amazing job at describing Downside, the Church and it's grounds and Chess and Terrible's apartments that I feel like I am right there with them.  You can practically smell the grimey city air, hear the homeless scurrying in the shadows and feel the hum of magic as the story takes us through some of the worst areas of Downside.

The main reason I love this series... Terrible!  Even when he hates Chess, he is still such a gentleman and so protective of her.   I just loved their screwed up relationship.  Just when I thought they were never going to get together we finally get their, at least for now, happily ever after at the end of City of Ghosts.  They both have such low opinions of themselves that I think they have a hard time believing anyone could love them.  Chess's drug addiction continues to get worse.  How she still functions with all the stuff she takes is beyond me.  I guess it pays to have a boyfriend as the local drug dealer's enforcer and a "friend" who's basically running the neighboring drug territory.   One part of me wishes she could kick this drug problem, or at least cut down, but the other part of me realizes this wouldn't be the same woman if that happened.  I was hoping we would get a little more with Terrible and his daughter, but maybe down the line.  Every time Chess does something to break Terrible's heart I just want to shake her!  I know I love a series when I'm so invested in the characters that I literally want to throw the book across the room when they do something that upsets me.  Of course just as quickly, Terrible can make me smile from some of the smallest things he says and does.  That is one rough around the edges guy but he's so sweet under all that tough guy exterior.  Oh, and Chess might maybe, kind of, sort of have a friend which she is seriously in need of.  I hope that works out.  A friend and a boyfriend and she will be in good shape.  Near the end of this book had me very worried!  Stacia Kane is one evil woman for putting me through that scene ;)

When I first started this series I had such a hard time getting used to the "downspeak" but I love it now!  My favorite is when Terrible calls her Chessiebomb :)

I highly recommend this series, especially the third and fourth books!  You've outdone yourself again Stacia Kane.  Thanks for letting me get my Terrible fix!

Sacrificial Magic will be released March 27th.  Don't forget to stop by March 20th-27th for our Stacia Kane Blog Hop.  There are lots of blogs participating and giving away some great books and merchandise!