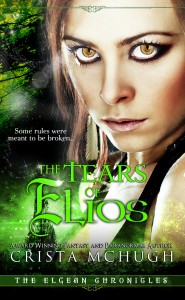 When Gregor finds a wounded shape shifter in a nearby cave he finds himself wanting to help her.  He takes her in, in part to learn about her species, even though it would be certain death if the King was to find out that a human was helping one of the other species in the kingdom.  Ranealya, one of the last shape shifters, has an extremely hard time trusting anyone. When Gregor heals her with his magic instead of killing her and allows her to stay with him while she heals, she finds herself truly enjoying his company.  You wouldn't know it from listening to the hard time she gives him though.  She's quite the spunky little trouble maker.  It's not all fun and games though.  The Azekborn, the King's demon hunters, have been tracking her for years and she's gotten a couple of close calls lately.  With the King trying to exterminate the other species in the kingdom, a group of them have banned together to create The Resistance.  Will Ranealya and Gregor be able to help Galen and The Resistance before they are all wiped from the realm?

This is not only the story of Ranealya and Gregor but also of Galen, the leader of The Resistance and Kyra.  I loved both of their stories.  They tie together about half way through the book giving you a full picture of what's going on.  Ranealya is really the main Character in the book and I like how everything revolves around her rough existance.  It was such a sweet story between the two of them, not the typical love (or lust) at first sight story.  We also get a spin off story starting shortly into the book about a young human who is the apprentice of a master mage.  It follows her through her escape from the Azekborn and as she enters The Resistance camp.  It's here that she meets Galen, a high elf.  Galen takes a quick liking to Kyra and takes over her training.  I liked their story as much as I enjoyed Ranealya and Gregor's.  This was a riveting tale of two couples and an amazing tale of Elgean and it's inhabitants.  I hadn't heard much about this book so I was going into it without too high of expectations but I was certainly impressed.  This is a quick read as the story just flew by.  I will definitely be continuing this series if she writes more.  The author left it with a cliffhanger that will have you ready for book 2.  Not a "Fever Series" or "Mortal Instruments" kind of cliff hanger that will make you angry though I assure you.  She wraps the stories of the couples up quite well.  Overall a great read.