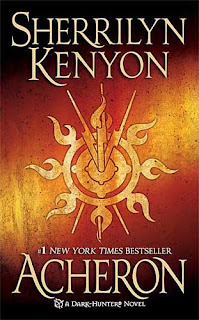 The most anticipated story in the blockbuster Dark-Hunter series. The never-before-revealed story of the Dark-Hunter leader, Acheron.  He was made human in order to escape death, but in death he was reborn a god. . .


Eleven thousand years ago a god was born. Cursed into the body of a human, Acheron spent a lifetime of shame. However, his human death unleashed an unspeakable horror that almost destroyed the earth. Then, brought back against his will, Acheron became the sole defender of mankind.  Only it was never that simple. For centuries, he has fought for our survival and hidden a past he’ll do anything to keep concealed. Until a lone woman who refuses to be intimidated by him threatens his very existence.  Now his survival, and ours, hinges on hers and old enemies reawaken and unite to kill them both.

I was concerned going into Acheron's book knowing that a large portion of the 736 pages would be of his tortured past.  While I have been anxiously awaiting his book as I've been reading the series, once I got to it I actually put it aside for a couple months.  We've gotten little clues about his past in the previous books and knew it wasn't going to be pretty.  I don't want to say much about his history as not to give anything away.  I will say that Sherrilyn Kenyon does an amazing job of balancing the details of what has happened to him without being too graphic.  If you've read this book, you may not feel that way as there were plenty of cringe worthy moments but his sexual abuse didn't get into details which I appreciated.

It's not very often we get to see a vulnerable side to Acheron.  Throughout the series we've come to know enough of him to realize that he is a reliable ally and leader for the Dark Hunters, but it hasn't always seemed to go both ways.  A lot of the Dark Hunters made an appearance in this book as well as Simi, Acheron's demon.  Simi always cracks me up.

In the second half of the book Acheron meets Tori, who is out to prove that Atlantis truly exists.  One problem, Ash doesn't want anyone to know of Atlantis or his past, so he sets out to discredit all of her findings.  When Tori's team discovers one of Ash's sister's journals that contains important information about Ash as well as how to destroy Artemis, numerous people have their eyes set on obtaining it at any cost.  Ash feels very protective of Tori and is serving as her bodyguard until the journal can be destroyed.  When he soon discovers that maybe he can truly trust her all bets are off.  There's a lot of history with Tori and Ash's daughter as well as with Tori's grandfather that links them all to Ash from years ago as well.

The only thing about the book I didn't like was that Ash kept saying how no one had ever truly loved him, but certainly his sister did, even if she was a little misguided at times.  I kept wanting to scream at him every time he dismissed her love for him!  Other than that it was an amazing book.  I was so glad that it was as long of a book as it was since I'm sad it's over now.  I have a feeling our next mystery men will be Savatar and Jaden, but we'll see.  Sherrilyn Kenyon did an amazing job with Acheron's story.  I can't imagine this one was an easy one to write.  She manages to pull pretty much every emotion out of you at some point in this book.  The first half of the book is a little rough to get through as this was certainly one of the darker in the series but I was so glad to finally get his story.  It was an amazing, emotional and touching story!

Favorite Acheron quote:  "Just because you can, doesn't mean you should."

Buy it here.
Posted by Underworld Love Addiction at 8:55 PM