Review: "A Soul For Trouble" by Crista McHugh 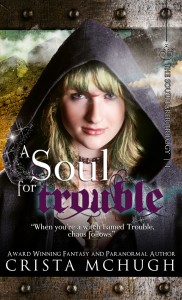 A Soul For Trouble is the first book in the Soulbearer Trilogy by Crista McHugh, author of Tears of Elios.

Arden, known to everyone as Trouble, is an outcast in her realm.  She's a blond haired, blue eyed witch trying to fit in in a sea of dark haired, brown eyed magic haters.  In Ranello, magic of any kind has been banned and women "belong" to the elder male of their family.  For this spunky young woman, feeling owned by anyone is bad enough but knowing that she would be put to death if anyone found out what she truly is makes for one unhappy Trouble.  When two strangers show up in town, she find herself faced with a murder as well as her own possession and kidnapping.  She becomes possessed by the god of chaos, Loku, after his current host is killed at the Inn where Trouble works.  Loku certainly lives up to the title, causing chaos at every turn.  One surprising benefit of her possession is her protector, Dev, who must guard Trouble since she is now the current soul-bearer.  Dev also agrees to train her in using her magic.  Good thing, because she's going to need it.  It turns out that a necromancer wants Loku all to himself and has every intention of going through Dev and Trouble to get him.  While Dev insists on keeping things strictly professional, they both find themselves battling their attraction to each other.  Of course, Kell, one of the princes of the kingdom, has his eyes on Trouble too and is none to subtle about it.  Will either men be able to win her affection?   Will Chaos get his way and drive the soul-bearer to her own death in order to pick a new host?
This was a very unique story with some great characters.  It's a fairly light read with plenty of suspense.  I love that the author didn't make this one of those "love/lust at first site" stories.  It's makes that connection between them feel so much more real when they have time to build it up.  The world building was a great, unique set up.  Her womanizing prince and honorable knight were funny, sexy and frustrating as hell.  I totally shared in Trouble's frustration with these two.  The prejudice of the people of Ranello is infuriating as well.  Hello, if a witch saves your life with magic, you really want to burn her at the stake for that?!
I originally read this book because I was so impressed with Crista McHugh's book "The Tears of Elios."  I thoroughly enjoyed this story as well and can't wait for the sequel.  I say that so calmly now.  I may possibly have had a slightly larger reaction to realizing I was at the end of the book and would now have to wait months to find out what happens next ;)  I highly recommend this story and recommend that you check out Tears of Elios as well, click here for the review.
A Soul For Trouble is due to be released April 3rd.  You can visit Crista McHugh's site for a list of all of her books as well as a chance to enter to win a great gift basket to celebrate the release.