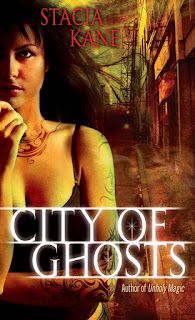 ***Warning - minor spoilers if you haven't read the previous books***

In this third installment, Chess Putnam is urged by the Church to team up with a Black Squad member to investigate a disturbing new case.  Teaming up with the Squad requires her to be Bound to protect the secrecy of their case but it comes with an added perk of a huge bonus, which means more drugs for Chess.  Bump, Chess's main drug dealer, insists on being kept in the loop regarding the case but due to the binding spell she took with the Squad she's walking a fine line between what she can and can't tell him.  A new street vendor in town also means new trouble for Chess.  She must work with Terrible again and she is certainly the last person he wants to see right now.  Still feeling very betrayed by her time spent with Lex things are tense to say the least.  Working with Terrible and the with Lauren, the Black Squad member, she must battle some seriously evil dark magic.  Handling this new case right after the death of a Chruch elder and her recent guy troubles is proving to be a deadly adventure.

This is by far the best book in the series so far.  The storyline was fast paced and extremely suspenseful.  Chess finds herself once again in the cross hairs of the Lamaru.  Even though Chess has done nothing to kick the drug problem she has, she is definitely growing.  She's starting to learn that she can lean on a few select people and trust them to be there when she needs them.  Terrible is so hurt by her recent betrayal but he doesn't let you feel bad for him in this book.  He stands his ground and doesn't cave just because he gets his way with Chess finally.  He's been so sweet and understanding with her to this point that I kind of expected him to forgive her fairly quickly.  I'm glad he stood his ground and didn't let Chess walk all over him.  There were some extremely emotional moments between Chess and Terrible that just had my heart squeezed into a little ball.  At least Chess finally admits to herself how she really feels about him.  The dark world that Kane has created in this story is amazing.  I really feel like I'm in this almost post-apocalyptic world and can picture the grimy, filthy streets, the market, it all has sucked me in.  It's great that Chess loves her dysfunctional little town and wouldn't want to be anywhere else.  I hope Terrible and Chess can finally be happy, at least for a little while.

I thank my bookclub girls for sucking me into this series.  It was rough going at the beginning, but totally worth it.  Sacrificial Magic, the 4th book in the series, will be coming out in March- I'm going to get started on that now and let you know what I think :)  There's also a short story in the series called "Home" that you can read at http://www.heroesandheartbreakers.com while you wait for the upcoming book.