Review: "A Taste of Midnight" by Lara Adiran 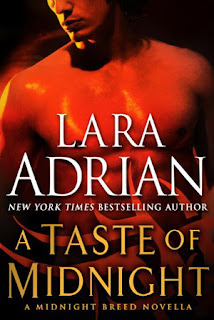 Widowed Breedmate Danika lost her mate, a member of The Order, a year and half ago.  In an attempt to help mend her broken heart she has gone back to his homeland of Scottland.  She quickly catches the eye of a dangerous crime boss who she believes is kidnapping humans for blood sport.  Suprisingly, it's his body guard that comes to Danika's aid, and she finds something very familiar about this dark stranger.  Bran has a dark secret he's been keeping from his boss.  When he helps protect Danika, he has to wonder if it's his plans that he's protecting or Danika herself?

This gives us a look at how Danika's been doing since Con's death.  My guess on who Bran was was wrong, but gave it a nice little twist.  I found it a little hard to believe that things progressed as quickly as they did, but I guess that's how it had to be to fit in a novella.  I was hoping to see a little more of our Order men, but at least we got the first chapter of "Darker After Midnight" at the end.  I'm leery about the upcoming book since I've never really liked Chase that much.  I'm sure Lara Adrian will change my mind though, she has a way of making me love all of the Breed men.