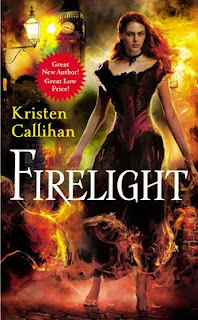 Firelight is the debut novel in an exciting new series called "Darkest London" by Kristen Callihan.  It is set to be released January 31st, 2012.

Miranda was born with a powerful gift that she has spent her life trying to control and keep secret from those in her small town. Her "gift" has destroyed her family's fortune and her father is desperate to find a way to build it back up.  When a strange and powerful man comes to Miranda's aid one night she can do little to forget about him.  It wont be the last time she sees him though.  Lord Benjamin Archer,  a mysterious and powerful nobleman, has agreed to pay her father a dowry to wed her, which he happily accepts.  Lord Archer, disfigured years ago, has been hiding behind a dark mask for most of his life.  Miranda soon finds out that entering into Lord Archer's world will mean some of the most gruesome and dangerous days of her life.  Will they be able to lift the curse in time to save Lord Archer's soul?  Will she want to once she finds out what he's been hiding behind that mask?

Set in the 1880's, this book was a cross between a paranormal and historical romance and a murder mystery all rolled into one.  I loved the mix of Lord Archer and Miranda's not quite human qualities with that old time feel.  I was pleasantly surprised with this book, especially being the first in a series.  The chemistry between Lord Archer and Miranda was amazing.  Certainly a "Beauty and the Beast" feel to it.  The suspense kept me glued to the book.  Just when I thought I had things figured out the author took me for a loop.  Miranda is a great heroine, intelligent, beautiful, powerful, able to protect herself and most importantly doesn't take crap from anyone.  Lord Archer... where to begin?  He's the typical tortured soul with a secretive past.  He's extremely powerful, loyal to a fault, leads a solitary life, strong willed and of course sexy.  Your typical alpha male I suppose.  I spent a good portion of the book trying to figure out what the hell Archer was.  She truly kept me guessing.  This definitely has a paranormal aspect to it but I would think anyone who loves historical romance or mystery novels would love this book.  The second book in the series, Moonglow, will be about Miranda's sister Daisy.  It's scheduled to be released in August, I can't wait!