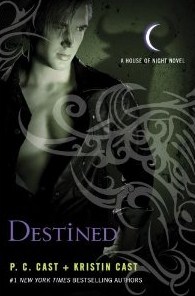 Destined is book #9 in the House of Night series.

Zoey is back from the Otherworld and safe and sound with her Guardian Warrior, Stark.  They are gearing up to face off with Neferet, the Hight Priestess of the Tulsa House of Night.  Kalona has freed Rephaim and with Nyx's forgiveness and gift of a human form, Rephaim and Stevie Rae are finally able to truly be together.  Rephaim's future is not without difficulties.  A catch with his human form is that he turns into a raven during the daylight hours and still battles with the darkness he has received from his past with his father.  To stir things up and invoke chaos, Neferet has hired humans to begin working at the House of Night.  She also introduces Aurox as a gift from Nyx to protect the House of Night when truly he was created to be her greatest weapon on her path with darkness.  Thanatos, one of the High Council members, comes to the House of Night as well to do a little research into Neferet herself.  With so many new additions to the House of Night there are bound to be troubles.  Will Zoey and her friends be able to stop Neferet and keep darkness at bay?

I have to start by saying that I think the childish teenage dialog was at it's all time worse in this book.  Either that or I just really wasn't in the mood for it.  I understand that we are supposed to be aware that they are teenagers and they are going to use slang but this is way more immature than you would expect, especially from a group that has supposedly lived through so many huge life changing experiences.  You would think, if anything, that they would sound and act more mature not the other way around.  That aside, I enjoyed the book for the most part.  As usual they were battling with Neferet which is getting a little old but we got lots of new characters to make up for it.  Kalona and Rephaim we've got to know previously but since Rephaim's change they have both really taken on whole new characters.  I enjoyed following Rephaim through his struggles with not only his human form and loss of immortality but also the daily issues.  He's working on building his relationship with Stevie Rae, fitting in with her friends and starting school.  Plus, he has his daddy issues.  His father, Kalona, doesn't make it easy for Rephaim to be free of him.  Aurox, that has been gifted to Neferet, is certainly a mystery.  Although he seems to be human they quickly see him start to transform physically into something else.  While most of the circle fear him, Zoey picks up on something deeper to him.  I can't tell you much more about him without giving away too much.  The cowboy that begins working with Lenobia is one of my favorite characters in this book.  He really shakes things up for Lenobia and it was great to see her happy.  There's a really touching part in the middle with her and his horse, Bonnie.  I'm sure we'll be seeing more of him and Aurox in the upcoming book.   If you can manage to over look the immature dialog and reactions to some of the situations, which is difficult to do, then the story itself was fairly intriguing.  I really hope we get rid of Neferet soon though because I'm not sure how many more times they can battle her, no one sees how bad she is and nothing really gets resolved with her.  Oh, and definitely something interesting going on with Kalona for the next book too, so I have hopes that we'll see a lot of Kalona, the cowboy and Rephaim in the next one and less of Neferet.