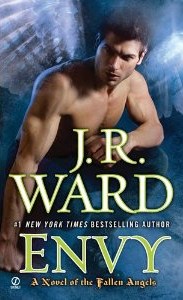 Remember Butch's cop buddies from The Black Dagger Brotherhood?  Well DelVecchio and De la Cruz are back in this third installment of "The Fallen Angels" by J.R. Ward.

As the son of a serial killer, homicide detective Thomas "Veck" DelVecchio, Jr., grew up in the shadow of evil. Now, on the knife-edge between civic duty and blind retribution, he atones for the sins of his father- while fighting his inner demons. Assigned to monitor Veck is Internal Affairs officer Sophia Reilly, whose interest in him is both professional and arousingly personal. And Veck and Sophia have another link: Jim Heron, a mysterious stranger with too many answers... to questions that are deadly. When Veck and Sophia are drawn into the ultimate battle between good and evil, their fallen angel savior is the only thing that stands between them and eternal damnation.

This book was definitely my favorite of the three so far.  It started out a little slow but picked up about half way through.  I like Veck and Reilly's story but also really enjoyed the new dynamic between Jim and Adrian.  A lot has changed with the Angels.  Devina seemed to not be quite as in our faces in this book too which was nice.  Very curious to find out what's going on with Eddie from here as well as Colin.  Colin gets in the action a little in this book and stirs things up with Nigel too.  Serves Nigel right!  While Reilly's character didn't particularly stand out as anybody too interesting, aside from a couple small parts, I really enjoyed Veck.  The series is definitely looking up!