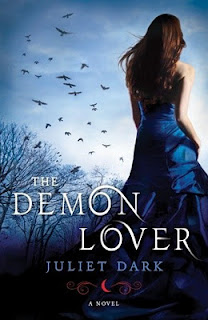 "The Demon Lover" is the first book in the Fairwick Chronicles series.  The story is based around Callie McFay, who takes a teaching job in Fairwick College's folklore department.  She has been having a recurring dream every night since she was a teenager of a dark shape entering her room in the moonlight and taking the shape of the seductive man of her dreams.  These evening trisks are written off to the fact that she has been writing The Sex Lives of Demon Lovers, but Callie knows all to well that there's something more to these visits than just dreams.  When she finds out the truth of her nightly visitor, that he's an incubus, she finds it hard to want to get rid of the man who has been seducing her every night.  There's a lot more to many of the people she meets in Fairwick including herself.  Will she be able to banish her Demon Lover back to the Shadowlands before he sucks her life force from her?

First off I just have to say that even though this is marketed as a paranormal romance I would certainly call it an urban fantasy.  There's definitely a lot going on in this little college town.  It turns out we have witches, fairies, succubus, incubus, vampires and much more attending and teaching at Fairwick College.  The Ganconer, her incubus, continues to visit her nightly.  The scenes with him, however, that were supposed to be hot and steamy were lacking a little something for me.  They also imply that Callie's falling in love with him but I didn't really believe that there was anything behind their "steamy" scenes to back that up.  There are a lot of other characters in town that could have some interesting stories down the line thought  While the author may have done a little too much world building to make this particular book too exciting, I have hope for the series in general.  There actually was much less about the Demon Lover than I expected from the title and description of the book.  The book was an okay read but unfortunately nothing special.  I will read the second book in the series to see where she takes the series from here however... there's still hope.