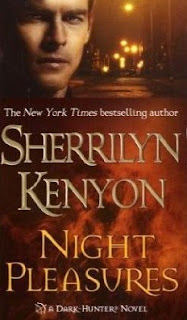 "Night Pleasures" is the second book in the "Dark Hunter" series.  If you read the first one, about Julian of Macedon, then you will remember his friend Kyrian of Thrace.  He was once a fierce Greek warrior and Prince.  After being betrayed by his wife and murdered, he literally sells his soul to get revenge.  He will be permitted to get his revenge but must commit to serving as a Dark Hunter.  His only goal now is to serve the Gods and protect humans from Daimons, the soul sucking Vampires.
Amanda has recently been dumped by her boyfriend after he finds out just how odd her family is.  It's full of palm readers and witch craft practicing, even a Vampire hunter (her twin sister Tabitha).  When a very powerful Daimon traps Amanda, she awakens handcuffed to a "buff stud in black leather" as she says.  He's a Vampire like man called a Dark Hunter.
Kyrian is drawn to Amanda like he's never felt in 2000 years but as a Dark Hunter he is not permitted to be with a woman for more than a couple nights.  When he discovers that the Daimon that is after him also seeks Amanda, he brings her home with him.  Amanda seems to have no fear of this powerful Dark Hunter and throws Kyrian off.  There's some great banter between the two of them and even better chemistry.  I love that it wasn't what we get a lot of... the I hate him, oh wait, I love him.  They seem to care for each other right away and things progressed from there.  After everything Kyrian has been through, I was so happy for him to finally get his HEA!  While this is the second book, it's really the first book where we learn about the "Dark Hunter" world.  Steamy with a great story line, some Greek mythology mixed in, a touch of humor... can't wait to meet some more of these sexy Dark Hunters!
Posted by Underworld Love Addiction at 8:42 PM