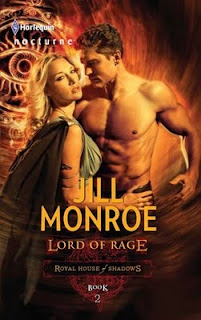 This is the second book in the "Royal House of Shadows" series written by Jill Monroe.  I love the new paranormal take on the old classic fairy tales.  This one has a "Goldilocks and the Three Bears" theme to it with a fantastic Berserker twist.  This was an advance read copy, the publisher release date will be September 20th, 2011.

The Blood Sorcerer has attacked the Kingdom of Elden.  As the King and Queen take their last breaths they cast a spell on each of their 4 children to send them far away for protection and to get revenge.  This book centers around Breena, the sole princess of Elden.  Until now she has lived a sheltered life preparing for the day her father would pick a husband for her that would further the Kingdom's alliances.  The time she truly looks forward to is each night when she uses her magic to enter the dreams of her lover and warrior.  When she is cast away she winds up in Ursan territory, home of the last remaining Berserkers.  She is drawn to the warrior from her dreams who turns out to be real, and no disappointment to Breena.  Will he be the warrior that she needs to help her get back to her people and find out if her brothers are still alive?

This was a great story.  Truly had the fairy tale feel to it.  Osborn, her berserker warrior, is more than she bargained for in her dreams but that seems to make her love him even more.  It was great to see Breena's journey from pampered princess to what she becomes.  This book felt a bit lighter than the first.  Breena and Osborn both have tortured pasts but other than a couple of short battles there's not a lot of action (other than between the two of them) in this book.  It still managed to hold my attention though.  I had never read anything by Jill Monroe before.  I will definitely have to check out some of her other books.